Adhesive masking tape also called sticky tape is a special king of pressure sensitive adhesive tape made using a thin easy to rear paper. The tape is also easy to release. Adhesive masking tape is sold in a variety of colors and sizes. The tape is commonly used in painting applications to cover areas which shouldn’t be painted. The tapes’ adhesive is its most useful element i.e. it allows the masking tape to be removed easily without leaving any residue or causing any damage to the surface where it is applied.

History
Adhesive masking tape/s date back to 1925. The tape was invented by Richard Drew after witnessing the frustration of auto-body workers as they used butcher paper to cover the cars they were painting. Drew witnessed the ineffectiveness of butcher paper in auto-body application which made him search for a suitable alternative. Butcher paper adhesive being used at the time was very strong which caused a lot of damage when it was being peeled off. Drew saw the need for a better adhesive which marked the birth of adhesive masking tape.

Rating
Adhesive tape is usually rated according to strength as mentioned above. It is however important to note that the tape can also be rated according to the number of days it stays without leaving any kind of residue on masked surfaces. The most common adhesive masking tape ratings are 7 and 14 days. It is however possible to find a tapes with a rating ranging from 1 to 60 days.

Typically, longer rated tapes have less adhesive. They are usually sold to be used on delicate or smooth surfaces i.e. vinyl wallpaper or recently painted walls. It is important to note that adhesive tapes should be removed after use regardless of their rating. This avoids surface damage caused by prolonged use of the tape.

Usage
The original use of adhesive masking tape as discussed above was covering off auto parts which didn’t require painting. To date, this continues to be the most common use of adhesive masking tape. The tape ensures painters do very clean painting jobs. Without the tape, auto painters among other painters wouldn’t be able to stop paint bleeds common under tape edges resulting in varied or fuzzy paint lines. Apart from auto applications, the tape is also used to hold blueprints firmly to drawing boards or light tables. The tape can also be used in glass pane applications to prevent glass shattering or harming anyone in the vicinity. 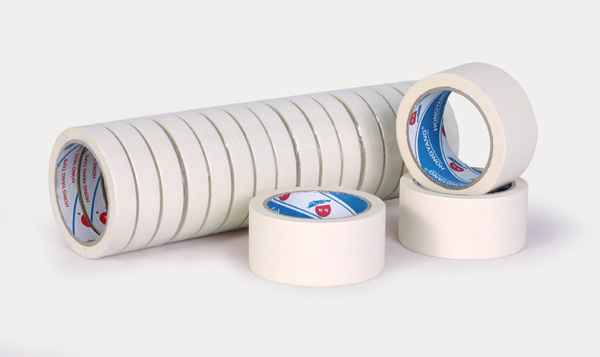