Adhesive duct tape is one of the most useful types of pressure-sensitive tapes on the market today due to its durability and its wide range of potential uses. Duct tape usually carries some type of cloth or scrim (fabric) backing, and is normally coated with a malleable plastic material known as low-density polyethylene. A variety of backing materials and adhesives can be used to comprise what is loosely called “duct tape,” but common characteristics include superior strength, flexibility, and higher-than-average stickiness. Duct tape is usually either grey or black, but it is available in a variety of other colors as well.

The roots of adhesive duct tape can be traced back to the early 1900’s, where a primitive form of duct tape made of cotton duck cloth with an adhesive solution applied to one side was in fairly common use. Known in those days as “duck tape,” it was utilized for all kinds of purposes ranging from shoe repair to steel cable reinforcement. Subsequent research led to a new type of adhesive tape being developed for military use during World War II. Scientists developed a new waterproof tape that could seal ammunition cases and keep them from being damaged by moisture. This tough new tape was able to be ripped by hand instead of having to be cut by scissors, making it very easy to use and quick to apply. The primary distinction between this new version of duct tape and the older “duck tape” was that the new formula utilized a rubber-based adhesive known as “Polycoat” on one side, which provided the tape’s waterproof characteristics. This new version of duct tape began to gain widespread acceptance within the military and was eventually offered for sale in hardware stores after the war.

Once duct tape began to be sold commercially in the 1950s, it was commonly used to wrap air ducts in construction projects. Its usefulness as an all-purpose household repair aid also contributed to its increasing popularity. Not too long after its commercial debut, the moniker “duct tape” came into widespread use to describe this multi-purpose adhesive tape. Albert Arno Incorporated, an HVAC company, took it a step further in 1960 by trademarking the name “Ductape” to describe its highly heat-resistant proprietary duct tape, capable of withstanding temperatures of up to 400 degrees Fahrenheit. In the 1970s, a clever businessman named Jack Kahl created a breakthrough branding strategy by trademarking the once-archaic “duck tape” name and then creating a playful cartoon duck logo to go along with it. He devised an aggressive direct mail marketing plan that reached over 32,000 hardware stores, eventually leading his company, Manco, to control approximately 40 percent of the entire duct tape market.

Modern duct tape is manufactured using a layer of any one of a variety of fabrics, known as “fill yarn,” to provide strength. These threads may be polyester, cotton, fiberglass, rayon, or nylon. During the manufacturing process, this thin layer of fabric is then laminated to a low-density polyethylene backing, typically grey in color due to the use of powdered aluminum in the polyethylene. The most common commercially available adhesive duct tape width is 1.9 inches (48mm), although 2-inch (51mm) duct tape is also a popular choice. Rolls of duct tape are usually sold in lengths of 55 meters (approx. 60 yards). Duct tape does not carry any safety certifications such as a UL or Proposition 65 listing; this means that the performance of duct tape can exhibit signs of inconsistency in certain environments or with certain uses. Adhesive duct tape can also pose as an environmental hazard when burned, as it may give off toxic smoke when incinerated.

Duct tape is used in a wide variety of applications. The auto racing industry has long used duct tape as a means to perform makeshift repairs to fiberglass bodywork, as well as other “on-the-fly” jobs. Duct tape has been a “crew member” of every NASA space shuttle mission since 1965, and on one Apollo 13 mission in 1970, duct tape was used to help repair some broken on-board carbon dioxide filters, subsequently saving the lives of three astronauts. Other reported uses have ranged from treating warts to repairing helicopter blades to providing temporary fixes for dropped calls on iPhones.

Adhesive duct tape has proven to be an excellent multi-purpose utility for all types of repair and construction projects. With the extensive variety of imaginative uses that duct tape can inspire, there may be a lot of truth to the statement popularized by authors Jim Berg and Tim Nyberg (a.k.a. “The Duct Tape Guys”): “It ain’t broke; it just lacks duct tape.” 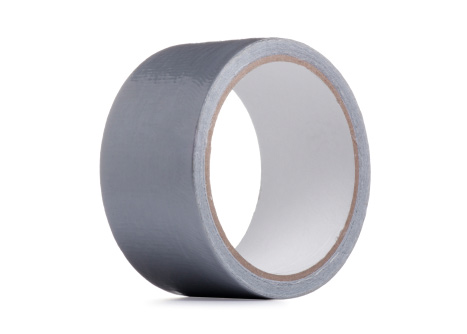